From the desk of Dr Barbara Anderson

This week's is Tmetolophota purdii this is one of my [Barbara Anderson, Project Co-ordinator] absolute favourite moths and you'll notice it on both the Te Taurapa (Southern) and Te Rauawa (West coast) guides. The most part of why I love this moth is its amazing colouring - it's a fabulous deep rusty-orange-burgundy with flashes of muted gold. It's large and velvety and fabulous. Come to think of it not unlike the colour of Mothra (it's Halloween as this is written). The second reason is that this was the first moth that I both caught and identified in my back garden. I think the rush of just knowing that you know which species something is regardless of taxa or geography is something special. I know we found some at Orokonui Ecosanctuary last week, and at Clutha Valley Primary School when we visited with our PSP project in March. I wonder if anyone has photos of it?

The lovely Dr Robert Hoare (Landcare Research) has written us a nice long post about this wonderful moth.

Dr Robert says the English common name for Tmetolophota purdii is "The Orange Astelia Wainscot" - personally I think we can do better than that. It belongs to the family Noctuidae, the largest family of moths in the world, but not in New Zealand, where we have a humble yet noble fauna of 160-odd species. The genus Tmetolophota is one of our endemic genera of the subfamily Noctuinae, and this genus feeds as larvae exclusively on monocotyledonous plants; in the case of T. purdii, on the tank-lilies of the genera Astelia and Collospermum. The name ‘wainscot’ comes from the likeness of many species in this group to the grain of a wooden panel; this camouflages them amongst the dead leaves of their hosts. Tmetolophota purdii is a widespread moth throughout New Zealand, but due to the fact that it never occurs in large numbers, and due to its immeasurable pinkish loveliness, and indeed the plump magnificence of its not inconsiderable size, it is always guaranteed to quicken the pulse of the lepidopterist as he or she lurks by the light trap, with a goblet of liquid sustenance in hand… 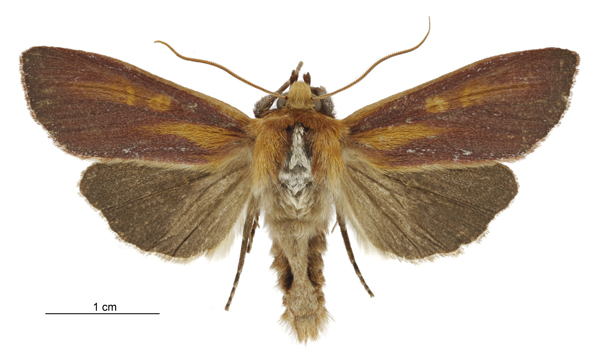 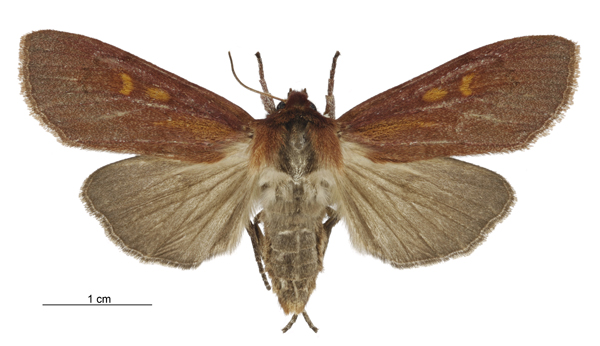